Where is Kannagi Street?

Kannagi street in a small side street in Choolaimedu. It leads off from Anna High Road, which connects to Nelson Manikkam Road. There is another Kannagi street in St Thomas’ Mount, and also a Kannagi Nagar near Kolathur. At the northern end of Marina Beach, you will also find a statue of Kannagi. 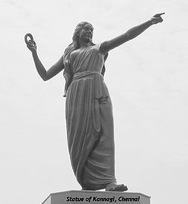 Kannagi is the heroine of ‘Silapathikaram’ – a Tamil epic written between 200 and 300 A.D. by Ilango Adigalar, a son of the Chera King. Silapathikaram means ‘The Jewel Anklet’. The story starts with an affluent jewel merchant, Kovalan, marrying a lovely young girl – Kannagi. They live in harmony for a time, until Kovalan succumbs to the charms of a dancer, Madhavi. He falls in love with her, and spends all his money buying her expensive presents. Eventually this makes him bankrupt, and he returns to Kannagi. Kannagi forgives his indiscretions, and offers to sell her anklets so that Kovalan regains some wealth. They decide to move to Madurai, sell the anklets there, and make their fortune through trade.

On arriving in Madurai, Kovalan attempts to sell one of the anklets in the market. Unbeknownst to him, a similar anklet is stolen from the Queen of Madurai (Pandiyan Nedunjelian’s wife). When the jeweler saw Kovalan with an anklet that was identical to the stolen one, he seized it and informed the King’s guard. Kovalan was sentenced to death.

When Kannagi heard of Kovalan’s death, she was furious. She went to the court and held up the pair to the anklet that Kovalan had tried to sell, as proof that he was not a thief.

Some interpretations say that the Queen’s anklet was filled with pearls, and Kannagi’s was filled with rubies; and this is how Kannagi proved that Kovalan had been put to death unfairly.

Kannagi’s anger is legendary. In the face of her wrath, the King and Queen died of shame. Kannagi’s quest for revenge was still not satisfied. She then uttered a terrible curse: the whole city of Madurai would burn for the sins of their rulers. It is said that due to her incredible chastity, the curse became a reality.

Kannagi is praised by modern Tamil leaders as a symbol of utmost chastity: she stayed loyal to her husband even after he abandoned her. It should be noted, however, that Periyar utterly disregarded Kannagi as a symbol of the ideal woman, questioning the idea that only women should be chaste.