Bader Sayeed is an eminent lawyer who practices at the Madras High Court. She is also the founder of the NGO Roshni.

Ms. Sayeed spoke about some recent developments in Muslim Personal Law, devoting considerable time to the question of the abolition of the triple talaq. However, she made it very clear that legislation (however progressive) could only be effective with thoughtful implementation as well as a focus on changing societal mindsets. At a time when people in power can make inflammatory statements about religion and gender (including rape threats), legislation is but the first step.

Ms. Sayeed, in fact, was of the opinion that the Indian constitution was an excellent one, and emphasised equality and secularism. However, in reality, the spirit of the constitution is being betrayed everyday by the arbitrary and discriminatory restrictions imposed by those in positions of power (for example, the ban on beef). Noting the treatment meted out to Dalits in particular, Ms. Sayeed wondered where the principle of liberty and dignity of the individual had been lost since the writing of the Constitution.

Being an experienced lawyer, Ms. Sayeed also admitted the difficulty of fighting injustice in India – even in the courts. For example, while she obtained an injunction overturning the validity of certificated of divorced issued by Qazis, she was distressed to note that these certificates still continued to be considered valid in various communities. In this way, Ms. Sayeed drove home the point that legislation can only go so far in improving the rights and status of women and minorities in India.

Ms. Sayeed concluded by noting that while Indian legislation contains adequate protection for women and minorities, it is necessary for society (especially those in power) to change their mindset and espouse a more secular attitude towards our countrymen and women. In addition, Ms. Sayeed believed that the Constitution of India is still sound, and there is no need for additional legislation to improve upon in. What is necessary is for more Indians to read and understand the Constitution of India. 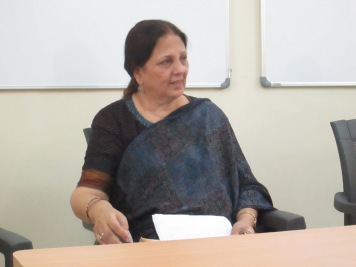 This report was compiled by Prajnya’s interns, Athmika and Varsha