Error: Twitter did not respond. Please wait a few minutes and refresh this page.

A report with photos by Mamta D

From 25th March to 31 st March, there’s a week-long street art festival happening at Marol, Andheri, Mumbai. What’s unique about the fest is that it’s the first time something like this has been organized in India exclusively for women.

Why the need for a women’s only street art fest, you may ask? Think of manels in India. Despite there being many large numbers of qualified eligible women speakers, time after time you see conventions and panels selecting only male speakers. The number of women speakers invited by organizers is negligibly small.

Some of the organisers 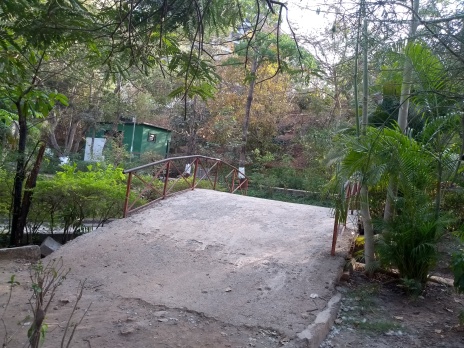 A bridge in the park

In the same vein, women artists are seldom seen on the streets, even in an urban setting like Mumbai. This is definitely not due to a dearth of women artists but due to myriad reasons, one of which is the prevalent mindset of society, a society not accustomed to seeing women boldly painting buildings and walls. It is time to change this now. Wicked Broz, a group of graffiti artists based in Marol together with Military Road Residents Welfare Association (MRRWA) conceived the idea of a women’s only street art fest and put it into motion. “LadiesFirst” it was to be called. A hashtag was coined – #RaniTakeOver. The fest would have talented female artists from all over who would lead the street art project through murals on buildings and other spaces, talks, workshops, films on art, discussions on street art and more! That’s what they hope to start with, at this first women’s only street art movement in Marol, Mumbai and then later, they aspire to take it to other cities as well. To normalize women creating street art. Anywhere. In any form.

A blog post was created on the WickedBroz site to announce this, an Instagram account was created, and friends and well-wishers were asked to send out tweets in support. Soon, the word spread. They even found sponsors in Camlin, Harley Davidson India, Art Lounge and more such enterprises.

white wall waiting to be painted

Today, 25th March, Day 1 of the event kicked off. By late noon, eagerly, I headed to the venue: Bharat Van, the public park at Military Road, Marol. It was pleasant to step inside the cool greens of the park after being surrounded by concrete all week. Tall trees, thick green shrubs, a colourful blossom here and there and I was already feeling joyous. Being a public park, there were some ‘walkers’ and ‘joggers’. In the center of the park, sitting in a circle on stone benches under a domed shelter, was a motely group of people. I headed towards them and introduced myself. I was told that the artists were away in different parts of Marol, painting the buildings. I was then shown the ampitheater area with stone steps, some distance away from the sitting group. Late in the evening, art-based films would be screened there. I was also shown a few white-coated walls in the park that would be painted in the next few days. I was shown the hall where workshops would be held. Meanwhile, the group struck up an impromptu singing session.

The mood was warm and hearty with laughter all around. By then, some of the artists returned. Abigail from Auckland was one of them. Though exhausted after painting most of the day, she was roped in for the impromptu song session and she responded with enthusiasm.

I was getting late for my long journey back home so I reluctantly bid adieu and headed out. Day 1 was eventful! In the next few days, some lucky buildings of Marol will be transformed by the talented hands of women artists from all over. And there will be more discussions, films, art walks and so on. You should go, if you are in Mumbai.

Here’s the agenda for Day 2: