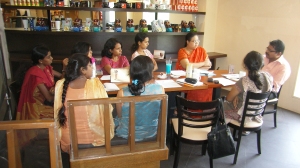 M.D.Muthukumaraswamy is the founder director of National Folklore Support Centre since 1997. He holds a double masters in English Literature and Philosophy. His PhD (1996) is on “Semiotic Analysis of Bharathakoothu Performances: A study in Theatrical Communication”. He is currently pursuing D.Philos in University of Oslo on “Social Imaginaries of  Divine: Selves, Spaces and Simulation in Kanchipuram.”  He was an Assistant Professor of Folklore 19987 to 1994,  and Folklore Consultant for the Ford Foundation’s New Delhi office 1994 to 1997. His publications include works in Tamil and English.

Dr. Muthukumaraswamy started by saying that following the classification of Tamil Sangam literature, he likes to classify narratives into ‘Agam’ and ‘Puram,’ broadly signifying personal/private/inner sphere and public/outer sphere respectively. Women’s narratives fall into the first category for the most part, in his view. Discourses about ethnography were largely discourses about ethics and ethics is about aesthetics and philosophy,  he posited as a preface to his talk, which explored the ethical, methodological and personal challenges of conducting ethnographic research.

Drawing on his field research experiences, Dr. Muthukumaraswamy underscored the importance of the researcher bringing something to the table as a way of building confidence with those whose lives are the subject of research.  If the researcher does not share something, the research respondent/informant is unlikely to do so. Once there is trust, there is a second dilemma for the researcher: how much of the narrative shared may be shared with the outside world which is the researcher’s own target audience? In his research, Dr. Muthukumaraswamy has come to depend on gathering several narratives to study the content and meaning of the common elements of the narrative structures rather than the content of individual narratives.

The discussion drew the speaker out on other issues: how to build confidence? what did he actually do while recording conversations? how are informants prepared for the end-use of the information they share? how to balance the importance given to transparency with regard to the researcher’s own background and process and the need to keep the subject in question front and centre? how to ‘give back’ to the community being researched?

The third Roundtable was held on the day after Lakshmi Krishnamurti passed away. We had always intended to start our Oral History work with her. But that is not to be and it serves to remind us not to dilly-dally over this work, waiting for the perfect funding and the perfect moment. Lakshmi Krishnamurti, social activist and freedom-fighter, RIP and thank you for the difference you made to India.