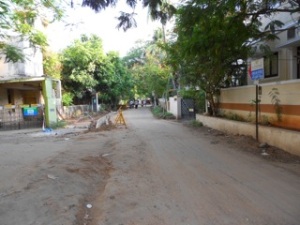 Where is Sarojini Street?

Sarojini Naidu was a freedom fighter and poet. Known as the Nightingale of India, she was the first woman President of the Indian National Congress, and also the first woman Governor of Uttar Pradesh.

Sarojini was born in Hyderabad on February 13th, 1879. Her father, Agorenath Chattopadhyay, was the founder and dean of Hyderabad College, which later became Nizam’s College. Her mother was Barada Sundara Devi, a Bengali poet. Sarojini was the eldest child – she had seven younger siblings.

At a very young age, it was clear that Sarojini had a strong inclination for academics. She made history when she topped the matriculation exam at Madras University when she was only twelve years old. She was also a noted linguist, and was fluent in English, Urdu, Telugu, Persian and Bengali. Her father was very keen that she study higher mathematics, but young Sarojini had other dreams. Once, when she was stuck while solving an algebra problem, she took a break and wrote her first poem. This evolved into a 1300- line epic, called ‘The Lady of the Lake’. It was clear now that Sarojini’s talents lay in the realm of poetry.

Encouraged by her father, she wrote her first play, ‘Maher Muneer’, in Persian. She won a scholarship to study further in King’s College, London, as well as Girton (Cambridge) – all this when she was 16 years old!

She married Dr Naidu when she was 19, at a time when inter-caste marriages were taboo. They had four children.

Sarojini’s first political act came in 1903, when she recited her poem ‘To India’ at the Bombay session of the Indian National Congress.

It was the Partition of Bengal in 1905 that really provided the impetus for Sarojini to join the national movement. She came into contact with Gopal Krishna Gohale, and was introduced to Mahatma Gandhi, Jawaharlal Nehru, Muhammad Ali Jinnah, Annie Besant and C P Ramaswamy Iyer; among others.

From 1915 to 1918, she travelled extensively, both in India and abroad, as a symbol of the Indian freedom struggle. She also addressed meetings about the welfare of the youth, dignity of labour, and women’s emancipation.

In 1916, she joined the Champaram movement after a meeting with Nehru; and in 1920, she threw herself whole-heartedly into the Non-Co-operation movement. In 1919, she was sent to England as the ambassador of the Home Rule League. Sarojini was the face of the Indian National Congress at various international events, including the Kenyan Indian Congress (1923) and the East African Indian Congress (1924).

In 1925, she was the President of the Congress session in Kanpur. The issues that came up during this session were: promotion of communal harmony, removal of untouchability, and emancipation of women.

In 1930, when Gandhi called for a Salt Satyagraha, Sarojini was one of the first leaders to respond. She spearheaded the movement at the Darshana Salt Factory, and participated towards the end of the Dandi march. She was jailed a number of times, and was eventually released due to ill health. During the Round Table Conference in 1931, she accompanied Gandhi to England.

Sarojini had a close relationship with Gandhi, and affectionately called him ‘Mickey Mouse’. Gandhi described her as the ‘jester’ of his court; and she is well-known for having remarked that it costs a great deal to keep Gandhi in poverty!

In 1941, when the call for the British to ‘Quit India’ echoed, Sarojini was arrested during the movement. She spent 21 months in jail.

In 1947, Sarojini became the first woman Governor in Independent India – of Uttar Pradesh. She passed away in office on March 2nd, 1949.

Sarojini Naidu played a major role in awaking the women of India. She encouraged them to leave their kitchens and enter public life. She led by example; and was one of the most vocal proponents of women’s empowerment. In her presidential address to the Congress session in Kanpur, she asserted, “…I will see to it- the women of India will see to it- that your men shall no longer betray the heritage of our nation…. Shall it be left to the woman to say that thy sons were faithless but thy daughters have saved thee…”

A prolific poet and a silver-tongued orator, Sarojini Naidu truly merited her title ‘The Nightingale of India’.

(n.d.). The Biography of Sarojini Naidu. In Poem Hunter. Retrieved May 17, 2012, from http://www.poemhunter.com/sarojini-naidu/biography/.