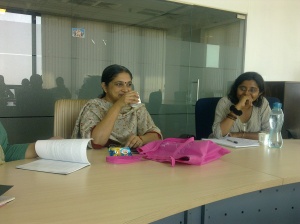 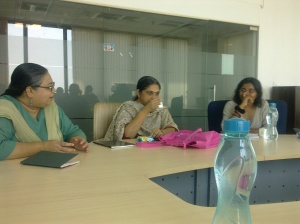 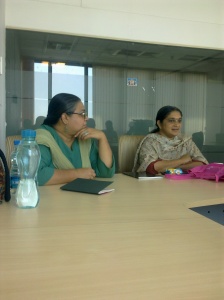 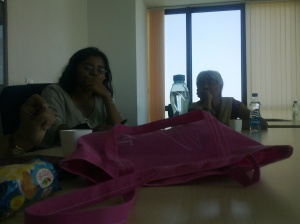 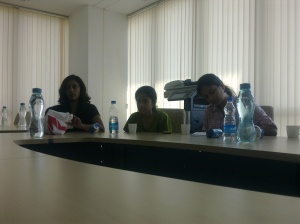 Ms Anitha S. has spent a considerable amount of time in Idinthakarai, the village which plays home to the struggle against the establishment of the nuclear power plant in Koodankulam. She told us that even though the media only picked up the struggle against ‘KK’ recently, the protest has been ongoing since 1988. The movement was started by the National Fishworkers’ Federation, as the proposed site for KK was a violation of an integral part of the coastal zone.

On September 9th and 10th, 2012, the police lathi charged a group of peaceful protesters from Idinthakarai, after which the village came into the news. The villagers had undertaken a sathyagraha march from their village to the power plant. In addition to lathi charges, the police resorted to outdated methods of suppressions including tear gas. Even after this incident, no official representative of the government visited Idinthakarai to explain the situation to the community.

Ms Anitha herself came into contact with the movement through Mr SP Udayakumar. She is a marine biologist, and noted that the Gulf of Mannar (100 km away from KK) is a bioreserve.

Ms Anitha told us that the bulk of the protesters are women, as are a number of the leaders. These women are able to lead the movement effectively, and Ms Anitha feels that this is a consequence of their extraordinary ability to communicate and listen actively.

These women leaders of the movement have five basic concerns:

Studies by private groups have shown that there is likely to be a negative impact on all these areas.

The protesters have also demanded that the government provides written assurance that the energy produced by KK will be used exclusively for civilian power needs. The government of India has refused to provide this assurance, as these documents are ‘secret’ and under the direct purview of the Prime Minister’s Office.

The struggle took on a new phase after the accident at the nuclear power plant in Fukushima, with more media coverage. Post-Fukushima, various international bodies have imposed more stringent guidelines to ensure the safety of nuclear power plants. There are 17 conditions, and KK currently fulfills 6 of them. The Government has announced that in 2 years, all 17 will be fulfilled. However, they don’t seem to have a plan for the interim period.

There have been a number of disturbing incidents during the testing phase in KK. In March 2012, trial runs held in the plant produced sounds loud enough to be heard by the surrounding villages.

As per national standards, there should be a radius of 16 km around a nuclear power plant within which no habitation is permitted. However, at KK, the nearest house in 500 metres away from the walls of the power plant. These houses were a part of the rehabilitation settlements built after the tsunami in 2004 – which raises the issue of the seismological safety of the area.

The Atomic Energy Minister has predicted that by 2025, 25% of the country’s energy needs can be met by nuclear power. However, in order for this to be achieved, there needs to be a power plant at 25 km intervals along the coastline.

Ms Anithapointed out that if the government accedes to the protesters’ demands to shut down KK, they might have to do the same in other nuclear power plants across the country. Additionally, India stands to lose an enormous amount of money if we pull out of various deals to import Uranium from other countries.

Currently, Idinthakarai is in a state of constant and systematic protests involving hunger strikes, dharnas, awareness-raising meetings around the country, etc.

Ms Anitha emphasized the social change which has come about as a result of the protest. Women have emerged as leaders in the area, caste barriers are broken, conflict between the Church and the Temple no longer exists; all this has contributed to create a homogenized society in Idinthakarai.