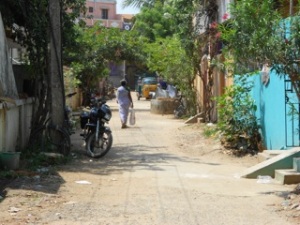 Avvaiyyar street in a small lane which runs perpendicular to Taramani Link road. There is a statue of Avvaiyyar on Marina Beach. There are many streets named after Avvaiyyar in Chennai, including in Jaffarkhanpet and Oragadam. 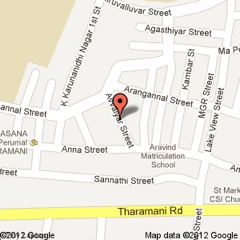 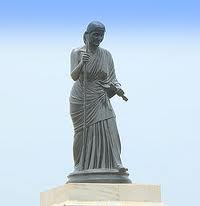 ‘Avvaiyyar’ literally means old woman. There were a few poetesses in Tamil history who merited this title, and two stand out.

The first Avvaiyyar lived during the Sangam age. This was an age (it is said) of equality of the sexes. Women had equal rights and powers. Avvaiyyar’s real name is not known. She was born to a Brahmin man and an untouchable women, who abandoned her because the Brahmin was on a spiritual journey at the time. She was rescued by a passing poet. Her devotion to Lord Ganesha is legendary. When many men wanted to marry her for her beauty, she only wanted to serve the Lord. She prayed to Ganesha to take away her youth and beauty so that she could focus on poetry, music and drama. This boon was granted, making her age quickly.

Avvaiyyar was a poetess in the court of King Adhiyamman. She sang many songs in his praise. A charming story about her reveals her cleverness. It seemed likely that war would break out between Adhiyaman and the King of Kanchipuram. Avvaiyyar went to Kanchipuram to try and prevent the war. Making this perilous journey alone, Avvaiyyar was granted an audience with the King of Kanchipuram. He hoped to instill fear in her (and, by extension, Adhiyaman) by showing her the pristine state of his weaponry and army. Avvaiyyar smartly turned the tables on him, by observing that Adhiyaman’s weaponry was blunted and broken by constant use in cutting down the enemy – thereby implying that Kanchipuram’s army was inexperienced. Thus, war was averted.

Legend tells us that Avvaiyyar did not die a natural death. She was assumed (transported in her human form) to Kailasha (home of Lord Shiva).

The second Avvaiyyar, who is so familiar in Tamil textbooks for children, lived in the 13th century. Her poetry is still very much in vogue today. She was the Chola court poet, a contemporary of Kambar and Ottakuttar. Her works are primarily directed at children, and they lay down basic dos and don’ts of everyday life and fundamental moral values.